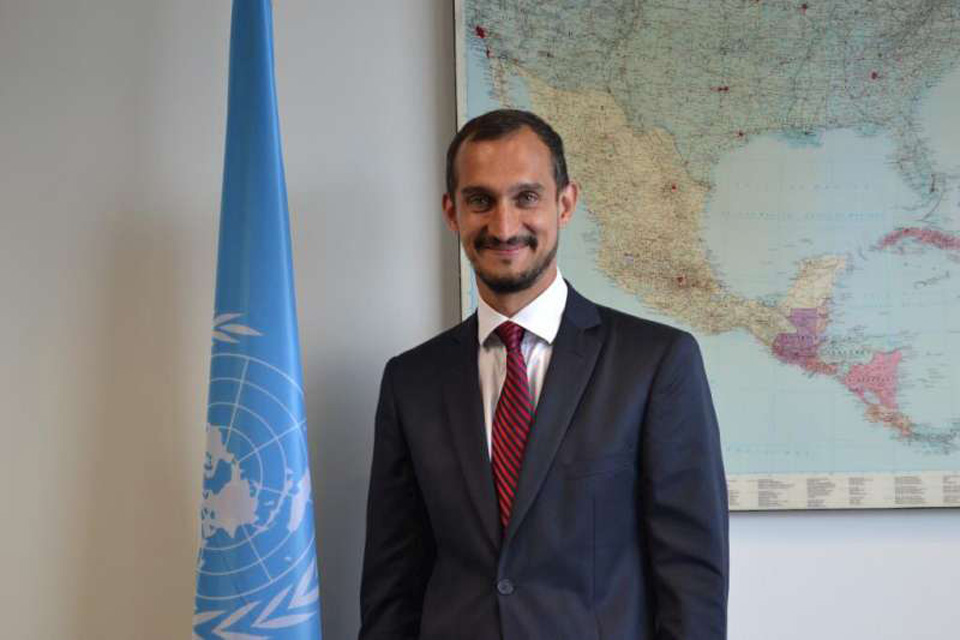 MEXICO CITY, Mexico, November 12 (UNHCR) – The UN refuge agency on Tuesday released an important report on the unprecedented number of unaccompanied children who are on the run in Mexico after fleeing insecurity in the Central American countries of El Salvador, Honduras and Guatemala. José Francisco Sieber, who heads UNHCR’s protection unit in Mexico, discussed the disturbing development with Isabel Coello, regional information officer for the European Union’s EU Humanitarian Aid and Civil Protection department (ECHO), a vital UNHCR partner in the region and elsewhere. Excerpts from the interview:

What are the displacement trends taking place in Mexico?

Mexico continues to receive an increasing number of asylum-seekers from the northern triangle of Central America [El Salvador, Honduras and Guatemala]). The significant variation is that, in addition to the traditional economic-driven migration movements, we now witness, with more frequency and intensity, individual accounts of violence and persecution from Central Americans who are seeking asylum and protection in Mexico. It is clear for us that this forced displacement is being caused mostly by disturbing levels of criminal violence, which are comparable only to the years of internal conflict and political violence in the region back in the 1980s and early 1990s.

You talk about forced displacement, not migration

This is a fundamental difference that must be underlined as there are significant legal and practical consequences. The importance resides in the fact that those being forcefully displaced are entitled to different forms of both domestic and international protection, to be defined by the factual circumstances that have led to displacement, and as dictated by international human rights, humanitarian and refugee law. In the case of Mexico, we emphasize the right of those Central Americans fleeing criminal violence in the northern triangle to access asylum and other protection procedures in Mexico, as these have been established and defined by both Mexican and international refugee law. Facilitating access to such procedures is the most important measure to be taken by Mexican authorities.

What are the dangers that unaccompanied children face?

Violence in the northern triangle has affected mostly the weakest. In the face of attempts by criminal actors to forcibly recruit them – different forms of exploitation, kidnapping, murder or sexual violence, in particular against girls – Central American children flee or are told to flee to escape and find safety abroad. Violence is a leading and more recurrent factor triggering children’s flight. This has been confirmed by studies conducted by UNHCR in both the United States and Mexican southern borders.

What are the rights of these children?

The first and paramount measure that must be adopted by states is the establishment of mechanisms enabling government officials, particularly those at the border, to effectively identify children with international protection needs, i.e. those children who should not be sent back and who must be referred to procedures and personnel in a position to assess their individual situation and, based on a principle of law that ensures their best interest, implement the appropriate protection response. This is a fundamental mechanism to guarantee, among others, that a child’s right to asylum is respected. We are not saying that all unaccompanied children are refugees. What we are saying is that their cases must be properly assessed.

Could those who are persecuted and threatened be recognized as refugees?

The answer is a clear yes. Of course, as I mentioned, it will depend on an assessment of the child’s individual circumstances and reasons for leaving his or her country, but in most countries in Latin America, including Mexico, we do have a legal definition of who is a refugee [Cartagena Declaration 1984] that considers not only those fleeing due to a well-founded fear of persecution, but also those that have been forcefully displaced due to other situations of violence, such as a context of generalized violence or a context where systematic human rights violations are taking place. This consideration is a vital one, as it allows Mexico and other countries to provide the required international protection in accordance to domestic legislation.

Is the available data just the tip of the iceberg?

Unfortunately, yes. One of the biggest challenges UNHCR and other humanitarian actors face in this context is invisibility. Again, the weakest are the most affected by the situation.

Are there humanitarian needs uncovered in terms of protection?

The protection needs of children are multiple. From adequate reception mechanisms that consider the specific needs of children, such as accommodation, leisure or basic social facilities, to access to education and health services. But I believe the most serious humanitarian need in this context is access to safety and protection against those very same criminal actors that have triggered this cycle of displacement. This is what asylum and international protection is all about and this type of physical protection requires not only the support humanitarians can provide, but also the political will of and recognition by states in the region.