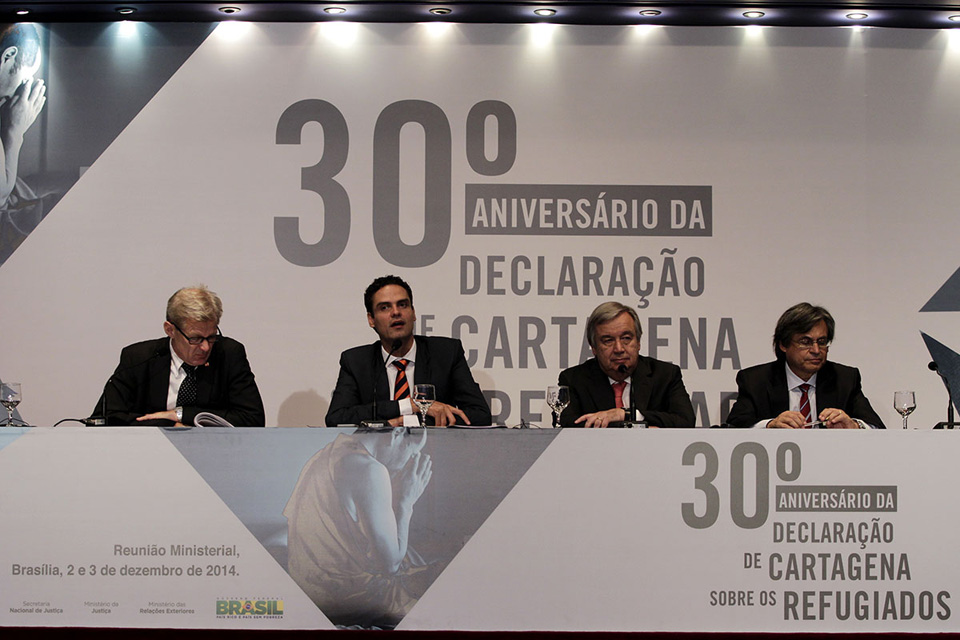 BRASILIA, Brazil, December 2 (UNHCR) – UN High Commissioner for Refugees António Guterres on Tuesday opened a ministerial meeting in Brazil that will map out forced displacement and statelessness challenges and chart a 10-year plan of action aimed at strengthening protection across the Latin America and Caribbean regions.

The two-day meeting in the Brazilian capital is being hosted by Brazil’s justice and foreign affairs ministries and UNHCR to commemorate the 30th anniversary of the Cartagena Declaration, a key document on the protection and rights of refugees, and reaffirm its principles. It helped expand on the 1951 UN Refugee convention’s definition of refugees in the wake of major refugee crises in Central America.

Opening the meeting, Guterres praised the legacy of the Cartagena Declaration and said it “reflects the capacity of Latin American and Caribbean countries to respond to humanitarian challenges with innovation and flexibility.”

Delegates from more than 30 governments and 150 civil society and other organizations are expected to adopt a new declaration and plan of action that will focus on improving the quality of national asylum systems, dealing with mixed migration – such as population flows involving migrants on the one hand and people in need of asylum on the other – especially in the Caribbean and protection needs of highly vulnerable groups such as people fleeing transnational organized crime. It will also cover solutions for refugees, statelessness, regional and international cooperation.

With more than 6 million internally displaced people, refugees, asylum-seekers and stateless people, Latin America has also recently been dealing with thousands of unaccompanied minors fleeing northwards and seeking safety in Central America and beyond.

In the past 30 years, Latin America has opened its doors to people fleeing from war and persecution, such as 33-year-old Congolese refugee Charly Kongo, who began a new life in Brazil six years ago. He fled his village after a massacre.

The integration of people like Charly reflect how asylum systems in the region have embraced high standards of protection. However, the so-called Cartagena+30 meeting is a chance to go even further in providing asylum mechanisms and protection.

One of the novelties of Cartagena+30 is the participation of the Caribbean and the regional solidarity offered to the Caribbean to tackle protection challenges and seek solutions in complex maritime mixed migration flows.

Regional cooperation is also needed to respond to new forms of displacement such as that caused by the growing gang violence in Central America countries. This includes measures to prevent harm and suffering, but also to ensure protection in transit and on arrival for those who are forced to flee their communities.

Those taking part in Caragena+30 include top officials from all countries in the region, representatives of international organizations, civil society members and academics.

By Francesca Fontanini in Brasilia, Brazil